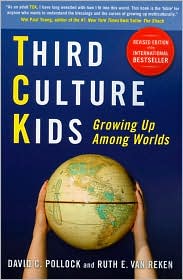 A reader said that biracial and multiracial children are often called Third Culture Kids overseas. (I can’t put my hands on original question. I think I put it in a safe place and forgot where, which means I hid it from myself. I really hate it when that happens.) The reader asked what I thought of the term, and I had to do a bit of research.

“Third Culture Kids,” according to the U.S. State Department, “are those who have spent some of their growing up years in a foreign country and experience a sense of not belonging to their passport country when they return to it. In adapting to life in a ‘foreign’ country they have also missed learning ways of their homeland and feel most at home in the ‘third-culture’ which they have created. Little understood by American schools, where they are often considered an oddity, what third culture kids want most is to be accepted as the individuals they are.”

Based on that definition, I have to say no. At the same time, I see where the reader is going. Biracial and multiracial children experience an entirely different culture in their homes, and you certainly don’t have to go to a country to experience its culture. Sometimes it is right there in your living room.

What do you say? Are biracial and multiracial children Third Culture Kids?