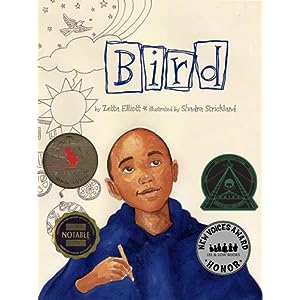 Bird delivers the story of an African American boy who loves to draw. At first the child borrows inspiration from his older brother, Marcus, a street artist. Marcus, though, becomes addicted to drugs, is kicked out of family home and dies. His brother’s death also contributes to the decline and death of his beloved grandfather. Bird’s elderly friend, Uncle Son, helps motivate him and tells a story from slavery times about how people who had been bound in chains could soar when their spirits were released.

I have not read this book to Simone and Nadia. It’s definitely for older children. The book deals with difficult topics and has won many awards, including the Ezra Jack Keats Book Award.

Do you want it in time for Christmas? Sign up for the survey and let me know below or submit a question in the comments section for me to answer at a later date. Good luck!