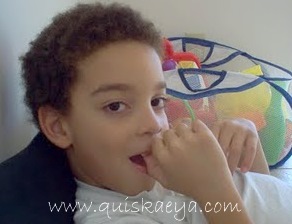 I love this conversation between mother and son. It shows how others tried to force their beliefs on a child and how he dealt with questions about race and identity.
By Quiskaeya
© Quiskaeya
The topic of being biracial isn’t one that we really discuss with our children. We often speak about the multicultural, bilingual aspect of our family to help them have a strong sense of self. I was watching a YouTube video where a mother asked her mixed raced children what does being biracial mean to them. Instinctively, I began wondering how my 8 yo would respond if I asked him questions about his identity.

Remarkably, my son has never shown a curiosity about his father and mother having very different complexions. Once, I read on a blog about a 3 yo biracial boy telling his mom “Mommy you are purple, daddy is pink and I’m orange!” It’s pretty amazing that a toddler would be so perceptive. This child clearly recognized the complexion difference in his family. We didn’t experience that with my 8yo when he was younger. Whether or not he recognized as a toddler that he was a different color than I am and much closer in complexion to his dad, is something he didn’t bring up. It’s a non-issue to him and it’s a non-issue to all of us. When I’ve had people question me about my son’s identity right in front of him, I’m often surprised that he doesn’t ask me about it later on.

Last year when I wrote Mama is Brown. Son is Tan. Got Confusion? that situation was probably the first time that I can think of where my 8 yo was personally put in a position to respond to someone questioning his relationship to me. The good thing is these types of situations are very infrequent these day since the stark similarity to me is undeniable. Up until he was about 3 yo he had auburn hair and a pale, pale complexion that gave people quite a bit of pause when they saw us together. I have more nanny and Is he your son? stories to tell than I care to remember prior to his hair changing color and his complexion gaining some real tone.

As I was thinking about these things, it made me more curious to find out what would be my son’s response regarding his race.

Me: What race or ethnicity do you tell people you are when they ask?

Son: Ohhhh! I thought you were talking about race as in running a race. I wasn’t sure why I would tell people what kind of race I’m in. *chuckles at this point*

Son: Well some of the kids at school asked me if I’m hispanic, because they said I look hispanic. My teacher asked about my family and I told her my mom is from Haiti and my dad is from Israel. She said that I’m African American.

Me: What did you tell the kids at school and your teacher?

Me: What did your teacher say?

Son: She laughed and said, “Well alright, if you wanna look at it that way I guess were all mixed African Americans.”

I’m happy to know my son can handle himself in these types of situations. Actually, it’s a relief to know that he is comfortable talking about his identity. I am surprised that he never mentioned any of these things to me. The lesson emphasized (yet again) is that as a parent it is necessary to bring up certain topics even if the child doesn’t appear to be phased or interested in the topics. He could have faced these questions feeling ill at ease or even confused as to how he should respond. I’m happy that wasn’t the case.

On another note, I think it’s interesting the comment the teacher made: “Well alright, if you wanna look at it that way I guess were all mixed…”? She has a point, then again what my son was talking about wasn’t the point she was making. Either she didn’t get what he was trying to say about being biracial or she doesn’t consider a person who is half one race and half another race to be biracial. Who knows…

3 thoughts to “On Being Biracial”