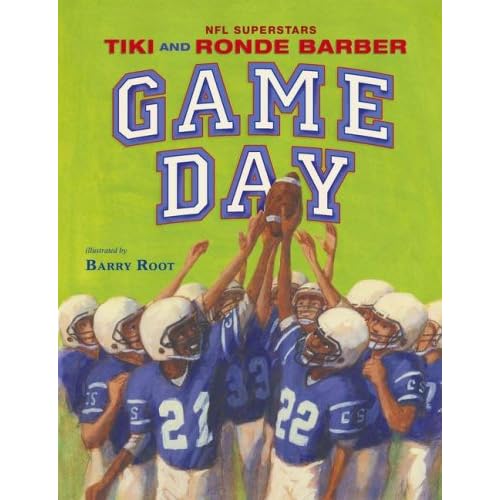 By Tiki and Ronde Barber

We have one serious football fan and two blossoming football fans in our home. With this in mind, I picked up Game Day at the library for some father-daughter bonding time.

In the book, NFL stars Tiki and Ronde Barber play for a Pee Wee league. Ronde, a defensive back, blocks players, while his twin brother, Tiki, scores a winning touchdown. After the game, a reporter visits the brothers at home, interviews Tiki and ignores Ronde and his contribution to the game. Ronde is disappointed and wonders why no one notices how he helped his brother score. After Ronde suffers a minor injury, Tiki struggles in the game. Meanwhile, their coach tells Ronde the reason Tiki is struggling is because he is missing his “main man.”

During football practice, the coach tells the brothers about his plans for a new play, which involves both of them.  The twins use the play in the next game and propel the team to victory.

Simone and Nadia understand the book’s universal message of teamwork even though they do not understand all of the football terms. The story illustrates the strength, abilities, and differences of two brothers and can be used to start discussions about all three.